We have compiled a detailed list of the stars and planets, planetary nebulae and rare celestial phenomena that await you in February in our Sky Guide February 2021. You can get a first overview here.


Rare natural phenomenon returns: Zodiacal light to be observed at the end of February


The first rare natural phenomenon of the year awaits you at the end of February: At dusk, starting at about 19:00 and under very good conditions, you can discover the so-called Zodiacal Light.


To see this delicate cone of light, you need to get out of towns and villages on a clear day, far away from any artificial light. The best thing to do is to find a small hill and look to the west. These are billions of tiny dust particles in our solar system that reflect the light of the sun that has just set.


The zodiacal light can only be seen twice a year in our latitudes: The first time in the days around 1 March. The second time is in mid-October.


Planetary duo: Only Mars and Uranus wander across the February sky


While we were very spoiled in the past months planet-wise - sometimes all the planets passed over our heads in the firmament as if strung together on a string of pearls - February is comparatively lukewarm. Only Mars is still visible to the naked eye. But it shines brightly and is easy to spot shortly after sunset high in the south. In the telescope, however, the planetary disk is very small and hardly shows any details long after the opposition. With the help of a telescope, you can also discover the gas planet Uranus in February in the early evening. Tonight, 1 February, it is particularly easy: Uranus is only a finger's breadth to the right below Mars. All the other planets in our solar system are too close to the central star in their orbits around the sun to be seen in its light.


But the magnificent winter hexagon - to the left of Mars - makes up for this with its bright stars Capella in Auriga, the twins Castor and Pollux, Prokyon in Canis Minor, Rigel in Orion, Aldebaran in Taurus and Sirius, the brightest fixed star in the sky, in Canis Major. From nine o'clock in the evening, the winter hexagon spans the entire southern horizon.


A look at the constellation Gemini is particularly worthwhile: even with the naked eye, the open star cluster M35 is visible. When viewed through a telescope, this little spot turns out to be a loose cluster of about 200 stars. There are a total of eight star clusters in the twins - and with the Eskimo Nebula a magnificent planetary nebula. The cloud of dust and gas is the remnant of a dying star that has shed its outermost shells.


Spring ahead: Spring images dominate second half of night


And while the winter images pass over your head, the spring images are already moving into position in the later part of the night, approaching from the east. The Big Dipper and the Spring Triangle announce the imminent awakening of nature in the second half of the night high in the south.


But let's go back to the winter images: Not far from celestial hunter Orion and just above the constellation of Taurus, the Pleiades shimmer. The seven main stars can be seen with the naked eye - and even binoculars with a magnification of 10 to 12 times are enough to make out a whole host of stars, like a field of nebulae. In fact, an open star cluster consisting of several thousand stars is hidden behind it.

By the way, at the end of February, Mars slipped into the picture a finger and a half below the Pleiades. To the left of Mars, you can see the distinctive V of the constellation Taurus, whose apex is Aldebaran (the Eye of Taurus), which shines almost as brightly as our red neighbouring planet.

Hardly any shooting stars in February


Wishers have bad cards in February: Only a few meteors flit across the night sky. You are most likely to see a few shooting stars twinkle between 22 and 26 February. Then three meteor streams of the February Leonids are active at the same time - but even they only deliver two to five shooting stars per hour. 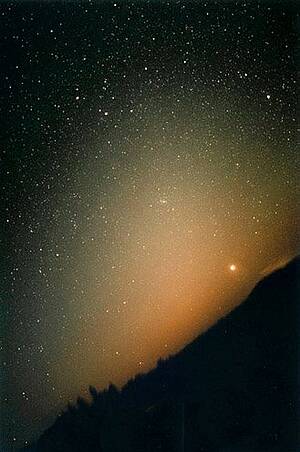