The night sky in October

Bright neighbour Mars and a constellation with a galaxy 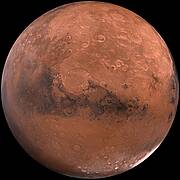 October not only gives us a firework of colours during the day, but also a veritable glory of stars during the ever-longer nights. This is because the stars sparkle particularly well in the dry autumn air of October - even faint objects can now be seen clearly.

And when the clocks are set back one hour on 25 October, the length of the bright day shrinks once again at the end of the month - then to less than 10 hours. Enough time, therefore, to devote to the beauty of the night sky. Of course, our Sky Guide will again tell you exactly which celestial objects can be discovered in October, when and where. We have summarised the highlights for you here:

Clear the stage for neighbour Mars

The double pack of Jupiter and Saturn is already in October in the early evening high on the southern horizon. At this time, Mars rises in the eastern sky - and with full force: our neighbouring planet is bright and large in October, and you can observe it all night long this month.

Mars makes its big entrance on 14 October, when it is in opposition to the Sun. As a result, it appears particularly bright and large and, with its apparent brightness of -2.2 mag at the end of the month, even shines slightly brighter than Jupiter. The morning hours then belong entirely to Venus, which despite the bright Mars remains the third brightest object in the sky after the Sun and Moon.

The summer triangle has already moved far to the southwest in the early hours of the night and has made room for the stars of the autumn square. Although the stars of the constellations Pegasus and Andromeda are not as bright as those of the Summer Triangle, they allow a view deep into our universe with the naked eye.

Andromeda and its nebula

Already at eight o'clock in the evening, Pegasus in the southeast cannot be overlooked by its typical square shape. Its four brightest stars form the striking square shape, with the star Sirrah, which marks the upper left corner, also belonging to the adjacent star chain Andromeda. And it offers a particularly beautiful view: The view of our neighbouring galaxy. The star system known as the Andromeda Nebula is about two and a half million light years away from us, almost twice the size of our Milky Way and visible to the naked eye as a pale shimmering patch. With binoculars (10x15) you can already make out the two smaller companion galaxies M32 and M110. Like a complete work of art the Andromeda Nebula extends almost over the entire field of view. At places without light pollution even the dark dust band of a spiral arm is visible. With a telescope with an aperture of 200 mm or more, you can then look directly into the middle of the galaxy and easily see the dust bands and bright star clusters.

Heart and soul in Cassiopeia

It's worth lifting your eyes a little further and looking high above Pegasus and Andromeda: There, in the course of the first half of the night, vertically at the zenith, Cassiopeia - the celestial W - has taken position. Our tip for deep sky observations: Heart and soul of Cassiopeia, the two bright emission nebulae Heart Nebula and Soul Nebula.

Discover the winter hexagon and the constellations of the zodiac

The early morning hours show that winter is not too far away. The stars of the winter hexagon have already risen high in the southeast. Orion the sky hunter and the brightly shining Sirius in the Big Dog are already conspicuous. During the long October nights you can see almost all constellations of the zodiac - except Libra and Scorpio. In Taurus - whose red star Aldebaran already belongs to the winter hexagon - you will also discover two open, famous star clusters: the Pleiades and the Hyades.

Our October tips for deep sky observations this month are the globular star cluster M30 in Capricorn, which you will find around nine o'clock in the evening high in the south. It is also worth taking a look at the constellation of Lyre, which can be easily recognised by its rhomboid shape, high above Capricorn: here the famous glowing Ring Nebula M57 is waiting for you.