Birdwatching: Now is the best time for bird watching

When the days become shorter, the temperatures do not allow a visit to the quarry pond or swimming pool and the foliage turns colourful again, the perfect time has come for wildlife and bird watching. 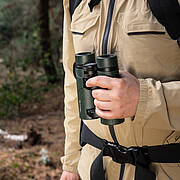 Right now, in September and October, the best months are an afternoon in the woods or some time spent walking through meadows and fields. Because there is a lot to see and experience there now. Especially in the world of birds there are a lot of changes coming up: Until the end of October, migratory birds can be observed very well on their way to their winter quarters. However, it is essential to get up early if you want to get a good look, because migratory birds look for food in the bushes, hedges and trees in the morning before they continue their journey. 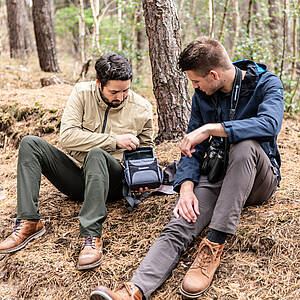 The equipment - Our recommendations

With the right equipment, for example our BRESSER JUNIOR 6x21 children's binoculars, observing is twice as much fun: the binoculars magnify everything six times. And thanks to the rubberised surface, they won't slip out of your hand. And if it does fall down, it is shockproof.

Our binoculars of the BRESSER Hunter series are attractive glasses for beginners in nature and bird watching thanks to their appealing design and excellent price/performance ratio. Due to their compact and handy design, this affordable model series is the ideal companion in many situations. The fully coated optics and the solid mechanics allow a good and true colour reproduction. The favourable ratio of objective aperture to magnification makes twilight observations possible, for example with the BRESSER Hunter 8x21 binoculars with 8x magnification or the BRESSER Hunter 10x50 10x50 binoculars, which, thanks to 10x magnification, make wildlife and nature observation a great experience.

By the way, all models of the Hunter series include dioptre compensation as well as foldable rubber eyecups for spectacle wearers.


For experienced wildlife observers, we have high quality binoculars in the Stalk and ATREK binocular series from our partner Vixen. Our stalking binoculars, such as the BRESSER Pirsch 10x42 or the BRESSER Pirsch 10x34, are equipped with the latest phase coating, which makes the image shine with higher contrast and high resolution. This is enhanced by the high-quality full multi-coating. The built-in BaK-4 glass material ensures an even brighter and clearer picture.

Our cooperation partner Vixen has further developed its popular ATREK roof binoculars. He has succeeded in improving the optical performance of the ATREK II binoculars without losing the compactness and transportability. The ATREK II binoculars, such as the ATREK II 8x32 DCF DCF or the ATREK II 8x42 DCF binoculars, impress with an extended field of view and an exceptional close focus of only 1.20 metres. This makes them ideal not only for observing nature on the move, but also for people with severe visual impairment.

Tip: These birds fly now or in the next few weeks

The Smoke- and House Martin are now heading for their winter quarters in Africa - easily recognisable by their forked tails.

Striking and especially worth seeing are cranes coming from Scandinavia and flying over Germany towards France.

Also the House Redstart (easily recognisable by its rust-red tail) and Song Thrush will fly over Germany in the next few weeks on their way to Southern and Western Europe, where the mild climate offers them sufficient food.

Starlings from Northern Europe, now wearing a brightly spotted plumage after the autumn moult, are on their way towards the French Atlantic coast. Their conspecifics from Central Europe also spend the winter in the Mediterranean region.

Greylag geese from Northern and Eastern Europe migrate in large groups to their wintering grounds, which they find on the west coast of Portugal, the North African Mediterranean coast and the Adriatic coast.

For those who are not lucky or do not get out of their feathers so early: Birds that spend the winter with us can now also be admired, as they are magically attracted by the berries and fruits that shine in autumn. These include robins, jays, greenfinches and siskins. 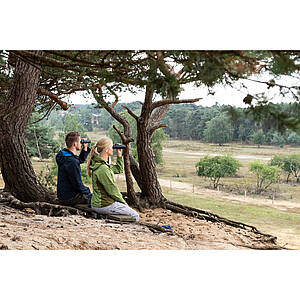 <- Back to: News
©2021 Bresser GmbH. All rights reserved. All logos and trademarks in this site are property of their respective owner.
Display cart
Cookie guidelines
This website uses cookies to ensure you get the best experience on our website. Cookie-related information