Golden Gate of the Ecliptic 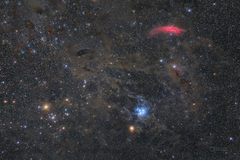 These days Mars is passing the "Golden Gate of the Ecliptic". This morning we received a stunning shot from our long-time companion Petr Horálek from the Czech Republic. Thank you Petr for sharing this rare sight with us and our readers.


The image, taken on 3 March 2021, shows Mars already very close to the Pleiades star cluster in the constellation of Taurus. The Red Planet's closest conjunction with the star cluster until 2038 is expected on the night of 5 to 6 March.


By the way: Only a few days before this moment, Mars was as bright as the star Aldebaran (shown here on the left). Aldebaran, the "eye of Taurus", is about 67 light years away from us and after all the 14th brightest star in our night sky. The image also shows complex molecular clouds and fainter star clusters. In the upper right corner, the California Nebula NGC 1499 can be seen at the edge of the Perseus constellation. 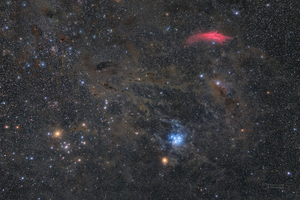