Since primaeval times, human beings have been interested in the celestial objects. For many thousands of years humans identified figures in particular groups of stars, which we today know as constellations.

Before the discovery and development of optical visual aids (Spotting scopes, telescopes) one could only look at the sky with one’s own eyes. Therefore people only had an overview of thousands of stars. With the development of astronomical telescopes humans could see further and further into space. Thus the foundation-stone was laid for scientificallybased astronomy.

The further mankind looked into the universe, the more stars, galaxies, nebulae, star clusters and star systems became visible. They produced new mysteries about the emergence of the universe and of our earth.

Astronomy is an “infinite history “and that makes it also interesting for the layman... 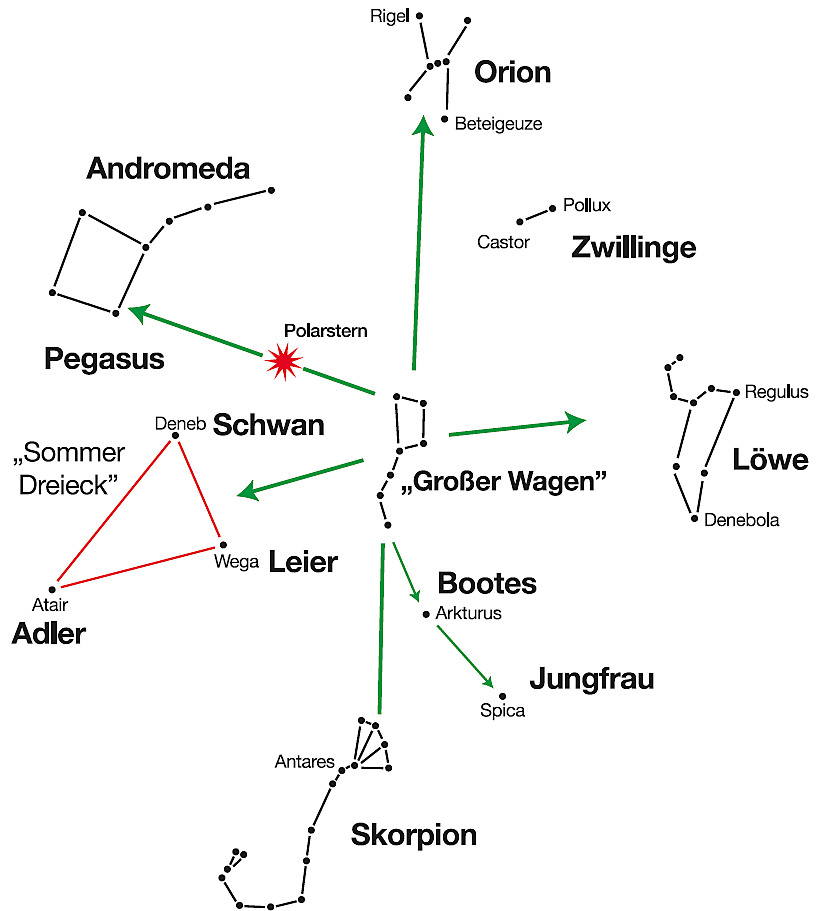 Orientation map to the constellations and stars

As a brand new owner of a telescope we would naturally like to immediately penetrate into the depths of the universe. Star observation can only take place on clear nights. If the weather is not kind to us, then we have more time to prepare ourselves for the first night. It is sensible to set up the equipment during daylight, which must eventually also be carried out in the dark. This telescope booklet is here to help you to obtain your first view of astronomy.

When finally, after a long wait, the sky clears and produces a clear view of the starlit skies, then it is time, to give “ first light” to the telescope, as amateur astronomers call „the baptism “of the telescope into the free sky. These evenings can be crucial in determining whether one is struck with fascination for the starlit sky or whether one is put off the hobby by the grind and disappointment of breakdowns. In the age of space travel, we are spoiled by astronomical photographs, taken up space probes and large telescopes. Science fiction films on television and in the cinema impress us with breath-taking star worlds. Our level of expectation regarding our telescope is consequently high. The first view through our telescope may therefore be somewhat sobering. With time we will find that the observation of astronomical objects experienced with our own eyes can be an exciting and fascinating passion. In order to ensure that the telescope does not become a poor investment, as a telescope manufacturer we have written a short manual, to introduce you a little to this fascinating hobby. We do not wish to pass on complex science, but to give a short, practical guide, on how to handle a telescope and what can be observed.

Although the science of astronomy has developed over the last 4000 years, we can assume that mankind has been concerned with the stars and the structure of the universe since the beginning of its existence several hundred thousand years ago.

From the cultic actions of the first millennia, astronomy as a science as we know it today developed over time.

People first built simple devices, then increasingly perfect and precise, to observe the course of the sun, moon, planets and stars. The knowledge gained by the ancient Egyptians, Greeks, Babylonians, Mayans and Chinese with their primitive means still amazes us today. For example, was Stonehenge in Salisbury in southern England an astronomical calendar and place of worship for the Celtic druids? How is it that the position of the pyramids of Giza in Egypt almost perfectly reflects the constellation of Orion? How did the Mayas manage to predict a solar eclipse? How did the peoples use astronomy for agriculture, religion and politics? These are all fascinating questions that have not lost any of their appeal to this day.

The age of modern astronomy began when Galileo Galilei pointed a tiny refracting telescope at the sky in 1604 and, full of fascination and curiosity, made his first observations.

The invention of the telescope brought new surprises. It was discovered that the Milky Way, that faintly luminous band that stretches across the entire sky, consists of millions and millions of stars.

Small, bright spots in the sky have been identified as galaxies, similar to our Milky Way system, in which our Sun is only one star among an almost infinite number of stars. The greater the light gathering capacity of the telescopes became, the more stars and nebulae were discovered. The universe was many thousands of times larger than ancient astronomers had ever imagined.

Astronomy has made a huge leap forward since the use of modern space technology and a wide range of new instrumental possibilities. The astronomical knowledge of the year 1990 is probably about three times as great as that of 1950. Just imagine: All generations of astronomers, from the oldest cultures of China, Egypt, Central and South America, Greece, etc., through the reformers of astronomy at the beginning of the modern age such as Copernicus, Kepler, Galileo or Newton, to the first observers at the large telescopes on Mount Wilson or Mount Palomar in the first half of the 20th century combined, have not achieved more than all the astronomers of the last three decades combined!

In 1990, the first astronomical telescope called the Hubble Space Telescope was positioned in space. This certainly opened a new chapter in the never-ending history of astronomy.

In the course of the 1990s, Hubble was joined by a wide range of satellites and probes, which use different methods to explore our solar system and the depths of space.

In 1999, the ESO "Very Large Telescope" (VLT) was launched in the Atacama Desert, Chile. This facility is one of the largest optical telescopes in the world and consists of four individual telescopes, each 8.2 m in diameter. This state-of-the-art facility is complemented by three small, mobile telescopes, each 1.8 m in diameter. With this unmatched optical resolution and under the perfect weather conditions there, the VLT delivers extremely sharp images and captures the light from the finest objects, no matter how far away they are. With these capabilities, it even surpasses the Hubble Space Telescope. 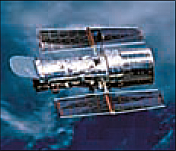