12 Signs of the Zodiac

What you must know

On the brightness of stars

2. The distance from us

3. How much light a star can emit because of its diameter.

In the second century (keep in mind: we’re living in the 21st century!), there lived a famous astronomer and mathematician named Hipparchus. (An „astronomer“ is a person who studies the stars.) Hipparchus recorded the first stars and their positions in a book. He gave the stars names and determined 6 various sizes in order to describe the stars‘ varying degrees of brightness. Therefore, he gave each star a number between 1 and 6, depending on how brightly it appeared in the sky. Today, astronomers refer to these 6 degrees of luminance with the unit “magnitude.” In this system, the brightest stars are given a magnitude of 1, and the least bright stars are referred to with a magnitude of 6.

About the Constellations in the Sky

Early on in history, people gave order to the great number of stars in the sky by creating constellations or zodiac signs (which you know from horoscopes). In this way, it was easier for them to relocate stars they had already seen. Depending on the culture, the constellations were given different names. In the west, they were mostly called after the Greek or Roman names (e.g. Aries for the ram, Aquarius for the water carrier and Taurus for the bull). Today, there are 88 “official” constellations that are constantly being watched by accredited astronomical scientists.

Which constellation are you? The zodiac signs.

Even a very long time ago, experienced astronomers were asking themselves what the sky would look like if the stars were also visible by day. On the basis of their drawings of the night sky, they saw that the sun seemed to pass through one constellation per month. These 12 constellations make up special places in the sky that we call the zodiac, the “circle of animals.” These constellations we call the “zodiac constellations,” which correspond to the 12 “zodiac signs” (Figure 1).

Each one has a special symbol and was given a certain 30 days (approximately) in the calendar year. This time frame does not coincide with the beginning of the months of our calendar, but starts in the third week. As a result, it ends in the third week of the following month of the calendar we use today. Long ago, as well as today, there are 3 constellations for each of the four seasons (spring, summer, fall and winter). Many superstitious people believed strongly that everything that happened to them in life – their feelings and their fate – were very closely connected to the zodiac sign that was visible in the sky when they were born. Even today, thousands of years later, people still believe in the power of the constellations and read their horoscopes regularly. Still, many people read their horoscope for fun, and not because they really believe in it.

The time spans can vary a couple of days over two years.

On the next pages, you will learn more about the specific zodiac signs. There you can read more about what constellations look like, and how to identify them in the sky. In addition, each image is accompanied by an exciting story from mythology. 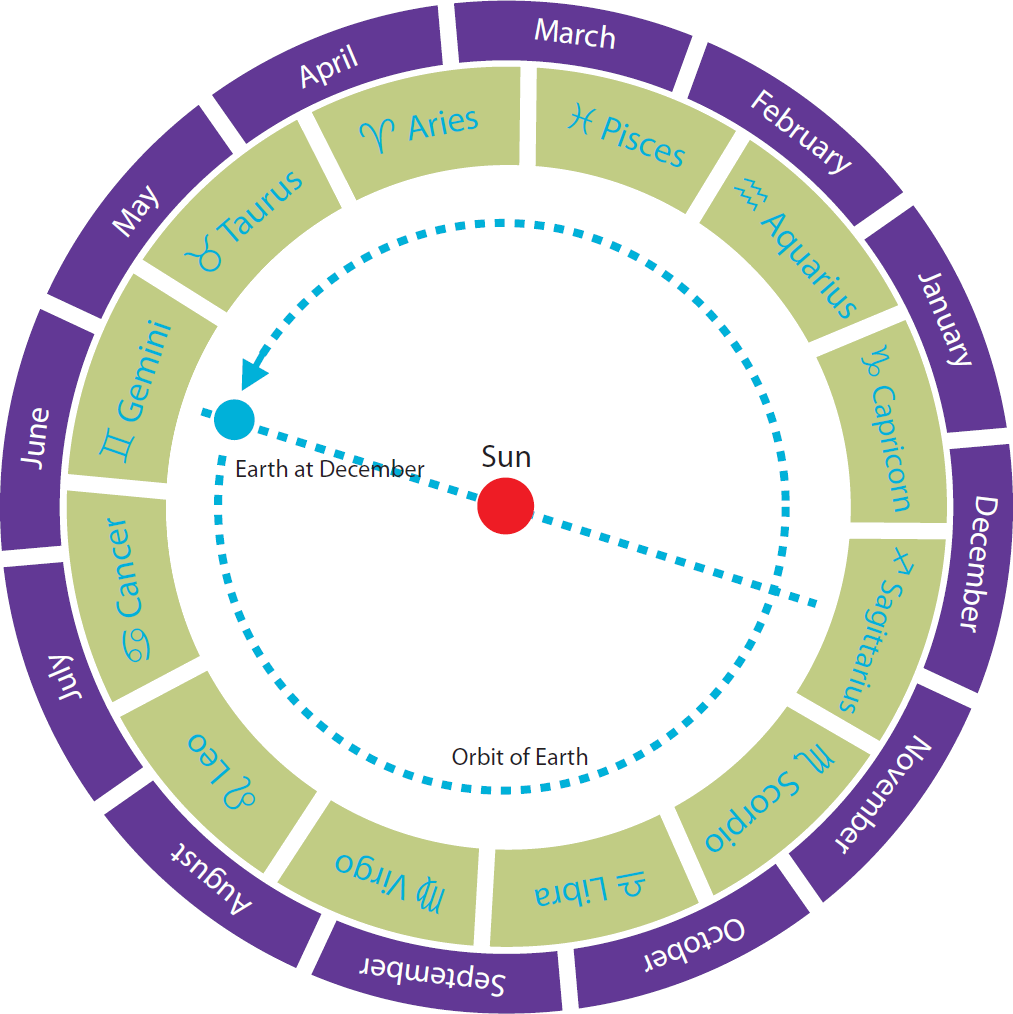