The starry sky in August 2020: It's raining stars!

Shooting stars over shooting stars, a magnificent summer Milky Way and all the planets of our solar system

The August nights are perhaps the most beautiful of the year. Find out about the highlights of the weeks ahead - for more detailed information and even more observation tips, please refer to our English-language Sky Guide for August 2020.

In August the length of the day decreases by one and a half hours. If the sun is still shining for 15 hours at the beginning of the month, it is only 13.5 hours at the end of August. At the end of August it gets dark noticeably earlier and the dark night lasts for six and a half hours: from about 22:00 to half past four in the morning. This leaves more time for amateur astronomers and sky researchers.

Shooting stars: the Perseids are here

For a few days now they have been flitting across the night sky - in August, however, it seems that there is a real rainfall of shooting stars: The Perseids are here and send up to 100 shooting stars per hour in August. The reason for the meteor stream is comet 109P/Swift-Tuttle. On its orbit around the sun, it leaves behind huge amounts of dust particles in the Earth's orbit, which burn up in the Earth's atmosphere and thus become shooting stars.

The shooting star stream derives its name from the constellation Perseus, from which the meteor stream seems to come. The Perseids reach their maximum during the night of 12 to 13 August; the best time to observe them is between 11 pm and 4 am, because it is dark enough then. It is best to drive out of the cities and find a higher place - a small hill is enough. Now just look at the northeast sky, wait a few minutes and you can already start with the "wish wish". The Perseids weaken in the following nights, but are still active until August 24th.

Already at dusk in the southeast sky Jupiter shines brightly, which soon gets company from Saturn. Saturn, however, is much fainter and is already surpassed by Mars, which is getting brighter and brighter. About 23.30 o'clock our red neighbour planet appears at the beginning of August above the eastern horizon - at the end of the month already about 21:00 o'clock. In the course of the month Mars increases in brightness (from -1.1 mag to -1.8 mag) and apparent size. Incidentally, Mars is accompanied by Neptune and Uranus: the two gas giants take the bright Mars in their middle. However, you need at least a very good pair of binoculars with a tripod or a telescope to discover Mars' companion. By the way: Right above Mars is Neptune, left below Mars Uranus.

And the night sky has another special treat in store for professionals: deep in the south, right between Jupiter and Saturn, you can discover Pluto!

In the morning, from about 2:30 am, bright Venus outshines all other celestial bodies and cannot be overlooked until sunrise. But pay attention in the first days of August to the small, faint point which appears about 5:00 o'clock above the eastern horizon: Mercury can be seen with a little luck and with binoculars still about until 5 August at dawn. But once again briefly back to Venus: On August 15 she gets "visit" from the waning moon. The slender crescent moon is then just three finger widths above the morning star.

Summer triangle high in the south

However, from 23.00 hrs onwards Vega, Deneb and Atair dominate the starry sky. They form the summer triangle, which in August is high in the south, steeply above our heads. Did you know that Atair is not spherical, but a bit flattened? The reason is the almost unbelievably fast rotation of this star, which takes only six and a half hours for each revolution. By comparison, our sun needs 25 days for one revolution. 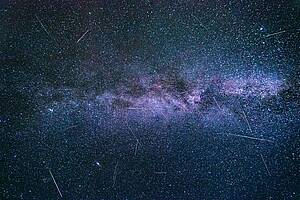 From mid-August onwards, it is finally dark enough at night again to discover the delicate ribbon of the Milky Way in all its glory - it runs right through the middle of the summer triangle, vertically across the entire night sky. From half past ten at the beginning of the month, from ten o'clock at the end of the month is the best time to marvel at the summer Milky Way. To the left of the star band - and not to be overlooked - the two planets Jupiter and Saturn sparkle.