The starry sky in January 2021 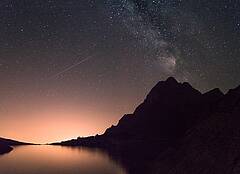 Tell me what the stars are like: If you have subscribed to our monthly Sky Guide, you already know what you can discover when and where in the night sky in January 2021. For everyone else, we provide an overview here.

In the long winter nights of January - the sky is black from around 6 p.m. onwards - the night sky resembles a veritable sea of stars. At this time of day, the autumn constellations are still high above our heads, but at around 9 p.m. they are replaced by the winter constellations. They form the famous winter hexagon, which takes up position high in the south well before midnight.


Particularly striking: the V-shaped constellation of Taurus, in the centre of which (the eye) is the bright, reddish shimmering Aldebaran. Just a little further west of Taurus you will notice a blurred-looking patch of several stars. It is the Pleiades. In fact, they are not just the seven stars visible to the naked eye, but more than 3000 stars.

Another unmissable winter constellation is Orion, which contributes another star of the winter hexagon with its right foot star, the blue, massive Rigel. Orion's companions, Canis Major and Canis Minor, form two further corners with their bright stars Prokyon and Sirus. Sirius, with an apparent brightness of -1.46 mag, is not only the brightest of the stars in the winter images, but also the brightest object ever in the firmament - after the Sun, the Moon and some bright planets, of course. Kastor and Pollux in Gemini and Capella in Auriga close the hexagon. In Auriga, by the way, you can already discover open clusters of young stars and beautiful nebulae like Flaming Star or Tadpole Nebula with the help of astro-binoculars.

Speaking of nebulae: Orion, the sky hunter, also has a remarkable nebula to offer, which you can see with the naked eye on clear nights and under ideal conditions. The Orion Nebula, 1500 light-years away, below the belt stars in Orion's sword neck, is just one of several star-forming regions in Orion.


Since the weekend, the Quadrantids have been flitting across the night sky. The first shooting star stream of the year is actually a very active one, sending a good 100 meteors per hour - but this year it reaches its maximum during the day. The full moon in the first week of January does the rest, making it hard to spot shooting stars even in the early morning hours - it's just too bright.


After Jupiter overtook Saturn in December, January holds a small highlight in store before it becomes quiet in the planetary round. At the beginning of January, the planetary pair of Jupiter and Saturn can still be seen in the west in the evening. On 10 and 11 January, Mercury will join them briefly: the three planets will meet on these days at dusk around 5.00 pm on the south-western horizon. The spectacle is difficult to see with the naked eye, but binoculars can help. While Mercury will remain visible until the end of the month, Saturn and Jupiter will say goodbye shortly after they meet and will no longer be visible in the sky until mid-March. After 29 January, Mercury will also no longer be visible. At least Mars remains visible, although it retreats into the first half of the night. Its two companions, Uranus and Neptune, can be seen by experienced observers with fast binoculars. Venus, the morning star, is also taking a break: it leaves the sky on 20 January and will not be visible again until May (then as the evening star).