The meteor shower over Germany

The Perseids soon send up to 100 shooting stars per hour 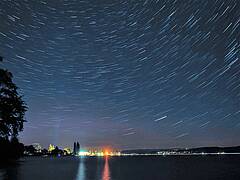 We give observation tips and explain how even beginners can take great pictures.

Since 17 July they are already flying and can be seen in the sky over Germany until 24 August: the Perseids. In the night from Wednesday, August 12 to Thursday, August 13, 2020, the Perseids reach their maximum. Until then, the number of shooting stars will continue to increase night after night. At the maximum, under perfect conditions, up to 100 shooting stars per hour can be seen. Unfortunately, the Perseids reach the maximum on August 12 during the daytime hours, between 10:00 and 23:00 CEST, and are not visible then.

So you have to wait until the evening hours of August 12th to be able to watch the natural spectacle - but don't worry: even then, there are still enough shooting stars falling.

Apparent starting point of the Perseids is the constellation Perseus, which can be found in the sky in northeast direction after dark. The annual meteor stream also owes its name to this constellation.

Observation tips: To spot as many shooting stars as possible

Between 2:00 and 4:00 in the morning it is darkest, then is the best time to observe. But already from 22:00 o'clock in the late evening it should at least be dark enough to see the first shooting stars flitting. This year, no moonlight disturbs the spectacle - it should be cloudless as well. Now the only thing left to do is to get out of the city, into the open nature, because here also no artificial light disturbs the observation. Ideally you should go slightly elevated on a hill with a clear view. After a few minutes, when your eyes get used to the darkness, you should see the first shooting stars flitting, they can be seen all over the sky.

Photo tips: This is how to take great pictures

Ideally, you should use an SLR or system camera. Since you cannot know exactly when and where the next shooting star will flash across the sky, it is best to use a lens with a short focal length (wide-angle lens). This way you can capture a large part of the sky. Set long exposure times and make sure you use a tripod and a remote shutter release (or the self-timer function) to prevent camera shake.

A wide range of tripods and camera accessories, such as remote shutter release, extra batteries and cleaning equipment can be found in our webshop: https://www.bresser.de/Fotostudio/ Don't forget to check our webshop: Patience, a comfortable deck chair and warm clothes. Even with high fall rates it can take a while until a shooting star falls into the picture. So take something warm to put on, a blanket and/or a stool.

Good photos are possible with these camera settings

It is imperative that the auto focus is removed and the camera (or lens) is set to manual focus. Otherwise the camera will constantly try to focus itself. With these settings, even beginners can take good photos:

Low ISO value: An ISO value of 100 or 200 is perfectly suitable, 400 is also possible. At higher values, the image noise increases more and more. The picture then looks.

small f-stop: To catch a lot of light, the aperture should be wide open. With f/3.5 and f/4.0 you catch enough light, the faster the lens the better.

long exposure time: We recommend an exposure time of about 30 seconds, then you will see a few more point-like stars around the shooting stars and the picture will be more interesting. But you can try a little bit yourself and set longer or shorter times.

These are the next shooting star nights

In autumn there are with the Alpha-Aurigids and the Orionids two small meteor streams with a few shooting stars. Until November you have to be patient until the next big shower - but it is worth it. Because the Leonids might send a real meteor storm on November 6 and 30. In the night of November 17th the Leonids reach their maximum and in good years they can and do produce thousands of shooting stars.

From 4 to 17 December 2020 the Geminides can be seen. On December 14 they reach their maximum with a still remarkable rate of falling of expected about 120 shooting stars per hour. A premature fireworks display at the end of the year. The final event is the Ursides between 17 and 26 December, but with a maximum of only 10 shooting stars per hour on 22 December.