The cities of Rhede and Bocholt, the DRK-Kreisverband Borken and a Madrid hospital received thousands of everyday masks and FFP2 masks 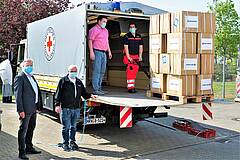 Rhede - Everything began very modestly: When there was no talk of having to wear breathing masks, optics specialist Bresser received several hundred masks for the Rhede staff from his business partner Jinghua Precision Optics Co. However, it was more important to Bresser's staff to give them to the nursing staff and employees in the rescue and health care sector, who certainly needed these masks much more urgently. After all, it was generally known that there were increasing supply bottlenecks.

So the protective masks were donated to the DRK Kreisverband in Borken. Thereupon the cautious question arose whether Bresser would have access to further masks. Initially, 5,000 were mentioned, a few days later 20,000. The Jinghua company, in the person of the owner Mr. He Jian, then agreed to donate the entire quantity. Other Chinese cooperation partners of Bresser, all of them private owner-managed optical manufacturers, followed and donated thousands of masks. Bresser himself promised to double the number and to purchase this additional quantity. In this way, more than 70,000 masks were collected, mostly so-called everyday masks and several thousand particle-filtering FFP2 masks for medical use. Most of these were handed over to the DRK-Kreisverband Borken e.V. as a donation, both for their own use and for use in; charities and nursing homes as well as in local authorities. The cities of Rhede and Bocholt were pleased to receive a total of 17,000 protective masks. Another 48,000 FFP2 masks, 2,000 protective goggles and 2,000 nitrile gloves were procured and invoiced to the DRK Borken at the purchase price. In addition, 2,000 FFP2 masks went to a hospital in Madrid, where the bottlenecks were even more extreme. 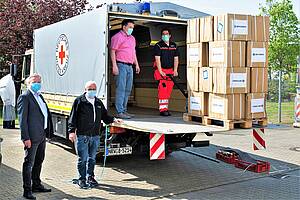 The deliveries were made in several stages. Since Bresser was active early in March, the processes ran relatively smoothly at the beginning. As global demand skyrocketed, the matter became more complicated: finished and pre-financed masks were issued to other customers immediately after completion. A Jinghua employee spent several days at the factory to ensure that the ordered goods could be secured for Bresser and the DRC. Complications arose when the Chinese authorities had to check and approve all medical protection products before export. As the necessary certificates were available, this was unproblematic, but led to delays. In addition, air freight costs have increased fivefold in the meantime. With the exception of one consignment that was confiscated by Spanish customs upon import, all protective masks finally reached Rhede safely and were distributed quickly. "We are overwhelmed and touched by the help of our long-standing business friends. We are especially pleased that we were able to make a small contribution in this emergency situation", said Helmut Ebbert, managing partner of Bresser GmbH.