Shower of shooting stars, lunar eclipse, luminous noctilucent clouds and a quartet of planets in the morning: one highlight follows the next in May.

The white nights have begun: At the North Pole the sun does not set at all during the month, in this country it does not get really dark until half past ten at the beginning of the month, and at the end of May not until midnight. And there is hardly any time to admire the splendour of the stars, because around three or four o'clock in the morning it gets too bright again. Our English-language Sky Guide tells you exactly what you can observe in the starry sky in May 2022 - a few special tips and highlights are already here.
When it's finally really dark, the springtime images are already high in the south. Around midnight, the summer triangle is already peeking over the southeast horizon. Shortly before sunrise, you can even catch a glimpse of the autumn quadrangle in the east.

The highlight of this month: On 16 May there will be a total lunar eclipse. At 4:27 a.m., the full moon will plunge into the Earth's umbra. Unfortunately, we can only observe a partial lunar eclipse in Germany, because the moon sets again exactly one hour later at the beginning of totality. But if you look towards the south-west horizon, you should at least be able to see a partial eclipse. Our readers from Spain and Portugal have a much better chance: there (and especially over the Atlantic!) you will be able to experience the total lunar eclipse. The spectacle lasts about one and a half hours.

Late in the evening or at dawn: Glowing noctilucent clouds

Let's continue with rare celestial spectacles: In May you can finally discover luminous noctilucent clouds again. This phenomenon can only be seen on summer nights between May and August - and even then only under special conditions: Exceptionally high clouds are caught by sunlight as darkness sets in. Normally, clouds hover at an altitude of about 13 kilometres. In order to shine, clouds must be in the mesopause of the Earth's atmosphere - and that is at an altitude of more than 80 kilometres! It also has to be very cold, around -120 degrees Celsius, because there are ice crystals in the clouds that reflect the sunlight and thus appear to glow.

The May Aquarids owe their name to the constellation Aquarius, from which they seem to come. And because Aquarius only peels over the eastern horizon from two o'clock in the morning, the best observation time is between four and five o'clock. After that it is too bright. In fact, the May Aquarids are dust trails from Halley's Comet, which last passed Earth in 1986.

Quartet of planets in the morning

What was already announced at the end of April continues in May in the morning sky: One after the other, the four brightest planets of our solar system, Saturn, Mars, Jupiter and Venus, become visible in the eastern sky.

Saturn starts at half past three, and is clearly visible above the horizon a good half hour later. Mars follows at about five o'clock and a few minutes later, a hand's breadth to the left, Venus and Jupiter appear. If the two appear like a double star at the beginning, Venus and Jupiter part ways in the course of the month. The latter rises higher and higher during the month and the distance between the two planets also increases. On the other hand, Jupiter approaches Mars until the two planets pass each other very closely at the end of the month, on 29 May. The brighter, larger shining point of light will then be Jupiter.

Extra tip: Mercury in the evening at the beginning of the month

Follow the slender crescent moon this evening, May 2, around 9:00 p.m. A finger's breadth to the right of it you will find a small, luminous dot. You have found Mercury. Now, at the beginning of May, is still the best time to see Mercury before the innermost planet of our solar system disappears from our field of vision again in a few days. 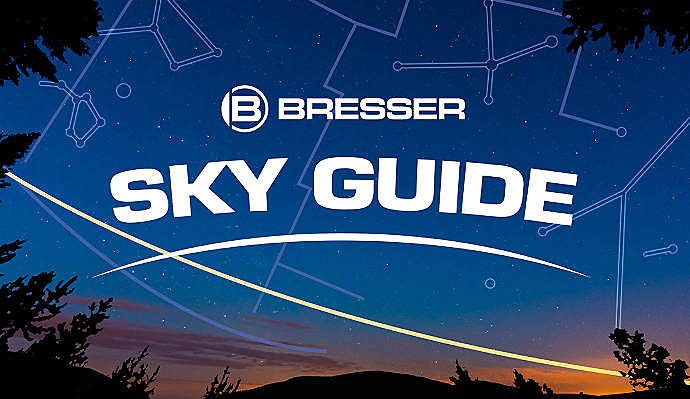